Where Kale Gets an ‘A’ – The Abbey Group Makes the News!!!

Written by AbbeyGroup on January 30, 2015. Posted in Abbey in the News, Awareness, Education, USDA 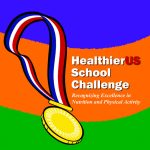 SWANTON — At Swanton School on Thursday, the cafeteria staff roasted 75 pounds of kale for an afternoon snack. According to students and staff, kale, in its chip form, is a school favorite.

Kale as an afternoon snack is just one of the reasons Swanton has become only the second school in Vermont to win a Gold Star Award from the U.S. Dept. of Agriculture for its work to provide nutritious foods and incorporate physical activity into the school day.

“This is such a thrilling award,” said Nina Hansen, district director for The Abbey Group, which provides the meals at Swanton School. “I’m so proud of Swanton.”

Swanton has increased the amount of time students spend in physical activity, incorporating movement into the school day. To help students learn about nutrition and eating, the school used grant money to purchase a cooking cart teachers can use to prepare food in the classroom and has a community garden whose bounty is served in the school cafeteria.

At lunchtime, The Abbey Group offers a fruit and vegetable bar from which students can choose a variety of fruits and vegetables or make a salad. Offerings on Thursday included sliced green peppers, grape tomatoes, fresh pineapple, apples, pears, raisins, applesauce, beats, carrots and roasted parsnips and carrots, which are part of the Harvest of the Month’s featured root vegetables.

Sixth grader Maya Rocheleau made a lunch of carrots and dip, pineapple, an apple, baked tortilla chips with salsa, and milk.

Rocheleau said she likes having a choice of fruits and vegetables. She sometimes makes a salad. “They have a variety of fruits on different days,” she said.

It was taco day and Rocheleau was pleased to have an alternative. Most of her fellow students went for tacos, with a couple of vegetables and fruits on the side.

Afternoon snack, a fruit or vegetable delivered to the classrooms, is also a favorite with Rocheleau. “I like most of them,” she said.

The changes in the lunchroom began about seven years ago when the school district switched to all whole grains in the cafeteria, including bread, pasta and brown rice, explained Hansen.

Swanton also chose several years ago not to sell items such as ice cream in the cafeteria, because some students could afford those things while others could not, explained Hansen.

“They… started out as embracing healthy eating and fitness and a willingness to try new things,” she said.

Every student in the school receives a free afternoon snack of a fruit or vegetable paid for by a federal grant for schools with high levels of poverty. In addition to the kale, typical snacks include green peppers, carrots, pears, and fresh pineapple.

Each class has a binder with information sheets about the foods served at snack time, so the kids can learn about the nutrition contained in the food they’re eating.

The afternoon snack is also a good time to introduce students to new foods, explained Tina Bushey, the assistant district director for The Abbey Group. Students are more likely to try something new during snack time than when taste tests offered in the cafeteria.

Sixth grade teacher Kirsten Belrose said she tries every afternoon snack offered and encourages her students to do the same.

The taste tests are part of the Harvest of the Month program Abbey Group does in conjunction with Green Mountain Farm to School. Each month features a new vegetable or group of vegetables. The Abbey Group will feature the food on the menu, including a recipe that families can make at home. The food also will make an appearance on the fruit and vegetable cart and in the afternoon snack, explained Bushey.

Swanton School first began sending home healthy recipes being offered in the school to parents several years ago as part of a community-wide Fit and Healthy Swanton program connected to the Northwestern Medical Center.

The new federal guidelines require that students be offered a fruit, vegetable, grain, protein and dairy food each day. Students must take offerings from three of the food groups and one of them must be a fruit or vegetable.

Students at Swanton also have the option of a made-to-order sandwich. They can choose from ham, turkey, tuna or cheese, with the vegetable toppings of their choice.

There is some waste. Some apples went into the trashcan untouched. Bushey said the Abbey tries to reduce waste by offering students a variety of foods they like. “We definitely accommodate to the students,” she said. “What the students like is what we offer.”

Students also have control over the portion size of their fruits and vegetables. They can take as much or as little as they want.

Some schools have a share table where students can put food they don’t want to eat. Students who are still hungry can take food from the table. However, the tables are discouraged by the Vermont Dept. of Health, explained Hansen.

The school also offers breakfast to all students. “We recognized that there can be a stigma for kids eating free breakfast,” said Hansen. So Swanton moved breakfast later.

Students can get breakfast up to 9:45 a.m. Classes either come down to the cafeteria together and get breakfast to take back to their room, or teachers send down orders for students and a couple of students to pick up the food, explained Bushey.

Of Swanton’s 500 students, 350 buy lunch at the school, 270 purchase breakfast, and 80 get an “amped up afternoon snack” through the Crossroads afterschool program that typically includes a sandwich or wrap, a fruit, vegetable and milk.

According to Bushey, part of the success of the food program comes from talking with students. For example, when the Abbey staff began making cheese sauce, the students wouldn’t eat it because it wasn’t yellow, so the staff added dry mustard. After that the students “were all over it,” said Bushey.

She offers students the chance to sample any food that interests them, even if they brought lunch from home. If she notices a student eating Spaghetti-O’s when the cafeteria is serving pasta, she’ll offer to buy the student lunch to encourage them to try new things. “The word homemade scares them because they’re not used to it,” Bushey said.

The cooking cart gives students a chance to learn how to cook and prepare food. It comes complete with bowls, pans, kid-safe knives and burners. So far, the cart has been most popular with the kindergarten teachers who have used it to make Stone Soup and apple sauce.

Many students don’t have an opportunity to learn those skills at home. “I’ve seen kids come in and they’ve never cracked an egg,” said Kirsten Belrose, a sixth grade teacher.

“When kids make it they tend to be more willing to try it,” she said.

One of the school’s future goals is to have more classrooms use the cart, said Lisa Garrow, the school’s office manager and one of the leaders of the efforts to improve nutrition in the school.

While there may be a variety of foods to eat at Swanton, students must finish lunch in 20 minutes. The school decided to shorten lunch by 10 minutes in order to increase recess to 40 minutes.

Students also can take part in 25 minutes of supervised recess before school starts.

When it’s too cold to be outside, the school tries to make use of the gym whenever possible to get students some activity, explained principal Dena St. Amor.

Inside recess can also mean time with a Wii fitness or dance program. “The kids are drenched when they’re done,” said Belrose.

Each classroom has cards showing how to do a variety of exercises. Teachers can take them out and use them for an activity break. “I tend to use mine before math,” said Belrose. “It makes a huge difference.”

Students have told her they have any easier paying attention to math lessons after moving around for a few minutes.

Last year her class did a plank challenge, increasing the amount of time they could hold a plank position. Doing planks build strength throughout the core of the body. This year they asked to do it again.

All students in Swanton have gym classes twice a week for a total of 90 minutes. To provide enough physical activity time for sixth graders, the physical education teachers run an intramural sports program. “All of us love it,” said sixth grader Kyle Quick.