Written by AbbeyGroup on August 17, 2013. Posted in Abbey in the News, Dishing Up Local, The Abbey Feeds, Uncategorized, USDA, VT Department of Ed 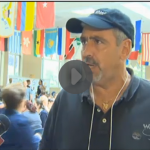 The Vermont Education Agency and a group of local nonprofits have come together to create the first-of-it’s-kind cafeteria cookbook. Abbey Group directors and chefs were there in St. Johnsbury to help try out some of the  recipes and pick up new ideas.  Check out the WCAX link below for the full video, and quote from Abbey Chef Director Josephi Gerardi.

ST. JOHNSBURY, Vt. -Call it a boot camp for school cooks. Dozens of school cooks and food directors from across the state are spending the week in St. Johnsbury to pick up new ideas and refine their techniques.When Penny Goss of Bakersfield started in the school kitchen back in the 1960s, it was simpler time.

“Back then there were hardly any regulations, you just fed the kids,” Goss said. “You did homemade things and you fed them. And now there a lot of things; you have to follow the rules.”

This year, the Vermont Education Agency and a group of local nonprofits have teamed up to produce a first-of-its-kind cookbook with recipes by school cooks for school cooks. Some seasonal items on the menu– sautéed greens and beans, Magenta-root slaw and corn salad.

“What we were trying to strive for was a cookbook that anybody would pick up and say, ‘wow, pictures– they’re great; the food looks wonderful,’ and that it brings up the level of school meals in terms of yeah, this is a profession, these are real culinary skills we’re talking about,” said Abbie Nelson of Vermont FEED.

Back in the classroom, the cooks fine-tune some of the recipes that will make the final cut.

There was a backlash at some schools last year over the news federal standards, complaints that there wasn’t enough to eat or that even popular local foods didn’t meet the standards.

“A little tough, but it really turned out well. And I think as we go forward with this, it’s going to change a bit. Kids are more accepting of it. I think it was the high school kids in the beginning that were kind of not too receptive. The younger kids coming up, they don’t know any better. They’re going to be really just learning it as they go and they think that is the norm,” said Joseph Gerardi of Townshend.

“The volume that school food service directors have to provide, the limited budgets that they work with, the limited staff that they get to work with was really a revelation for my students and myself, as well,” said Jim Birmingham of NECI.

The new cookbooks will go out to every school this fall– an effort to share the love of cooking with kids across the state.