Written by AbbeyGroup on May 9, 2013. Posted in Abbey in the News, Announcements, Dishing Up Local, Events 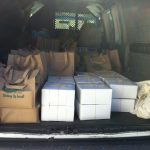 Last weekend was the world famous Tour of the Dragons bike race held in Bennington, Vermont. Since 2012, The Abbey Group, through the efforts of the Bennington area Food Service Director Maureen O’Neil, has provided the PIEzes for over 80 winners though out the weekend. Each winner receives either a  strawberry, rhubarb, apple or cherry pie. We are proud to be a part of such an important event for both the Bennington and greater bike racing community. Please read below for the full story!

The Abbey Group provides individually crafted food service programs that are designed for companies, institutions, colleges and schools. Their development team works with each group to develop a food service plan that meets the nutritional requirements and demanding corporate schedules.

The Abbey Group works closely with local growers to deliver the highest quality and most nutritious food products to its clients. “We recognize that many of the participants in the Tour of the Dragons are corporate decision makers, and the event provides a perfect platform for us to introduce Abbey Group Corporate Food Courts for their businesses,” said Marketing Director Abbey Underwood. “The Abbey Group is already well known for delivering high quality, healthy food choice to young minds in schools throughout Vermont. We want corporate leaders to learn that we offer individualized, high quality choices for the Corporate Food Courts as well. The Tour of the Dragons offers a great platform to achieve our goals.”

The 2013 Tour of the Dragons is a two-day, three race event, held on May 4and 5, with the most challenging race courses in New England. After Saturday morning’s 10.7-mile Time Trial, racers will tackle the Shaftsbury Circuit Race, a 50-mile route (66 miles for the Pros) in Bennington and Shaftsbury, one third of which is on dirt roads. Sunday’s Road Race in Manchester and surrounding communities is 71 miles for the amateurs and 124 miles for the Pros, again with portions on dirt roads.

“Race participants have increasingly sought out tough, technical courses and the Tour of the Dragons has quickly become recognized as the Most Challenging Race in New England,” said Race Director Jim Marshall. “The demographics of these athletes is a perfect match for the Abbey Group as the majority of the pacers are between the ages of 30 and 45, they own their own businesses or are the higher echelon, decision making executives in other companies. It is a great opportunity for the Abbey Group to reach these key people. We are proud to have them on our team.”

The Abbey Group fruit pies – strawberry/rhubarb, apple and cherry – became an instant sensation at the 2012 Tour of the Dragons. The Abbey Group has become an iconic brand and race winners from last year have already been asking if the pies are back. But first they have to win again!

The event is organized by Anthem Sports, organizers of the Stan’s NoTubes Great American Cycling Series and the Tour of the Battenkill in nearby New York – the largest Pro/Am cycling race in the US.

For more information, please see the event website at www.tourofthedragons.com