The Abbey Group Made The News! -School Lunches: How it works

Written by AbbeyGroup on October 29, 2014. Posted in Abbey in the News, Awareness, Inside The Abbey Group 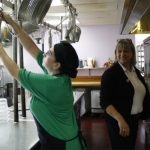 ST. ALBANS — People within The Abbey Group Food Services Management are quick to tell you – they’re not your typical lunch ladies.

The group, begun by Sherry and Dave Underwood, contracts lunch programs with close to 100 schools in Vermont, New Hampshire and New York as well as some 250 other non-school accounts. Thirteen of the school programs are in Franklin County, and some have been running for more than two decades. These include Bellows Free Academy, St. Albans, the first hot lunch program to be run by The Abbey Group starting in 1989.

“Our number one goal as a company is to feed children,” said vice president of finance Shannon Harrison.

“And feed them well,” added Wiese-Hansen. “We realize that there are at-risk children in Franklin County.”

“We really are the little engine that could in Vermont,” said Wiese-Hansen.

“Anything anyone wants from us,” said Harrison, “we’ll team up and do it.

Day in the cafeteria

On a fall Tuesday at BFA-St. Albans, site supervisor Jen Bombardier was busy overseeing the cafeteria kitchen as seven others readied lunch for the day.

“She’s always directing the day,” Wiese-Hansen said of Bombardier. She added that The Abbey Group’s employees are hired locally, and can come from a variety of backgrounds, with GEDs, college degrees, culinary experience or from business programs.

“It’s a profession,” Harrison said. “Overall as a company, we employ 350 people.”

Those working on a given school day begin at 6 a.m. and finish up around 2 p.m. at BFA-St. Albans. They begin by serving breakfast and end the day by cleaning up from lunch.

“Everybody has a main responsibility,” said Wiese-Hansen.

Everything is done in the schools’ kitchens. “I think one of the biggest misconceptions is [that] people always think that the Abbey owns the food service,” said Harrison. “The school owns their own service. We’re under contract to run it.”

Around 11:15 a.m. on one particular day at BFA-St. Albans’ hot lunch program, broccoli, macaroni and cheese and cornbread were set out by cafeteria workers, while homemade pizza, chicken fingers and salads were in the last stages of preparation. Walking by the walk-in cooler and freezer in BFA’s industrial size kitchen, Weise-Hansen pointed out that the cafeteria receives deliveries of local produce twice a week.

“We’ve been doing [local] long before it was cool,” said Harrison.

Bombardier opened up the deli-style sandwich station in the corner of the cafeteria, and she then went to check the fresh creamy potato soup and chili steaming nearby in their pots.

“Don’t they look good?” she asked.

Snacks, ready-made sandwiches and drinks were also lined up for students to grab and buy, right next to the salad bar. Fresh baked cookies were wrapped up and ready for purchase.

In accordance with state nutrition policies and the national 2010 Hunger-Free Kid Act, all cafeteria items are made with whole wheat, and none of the snacks were over 200 calories with each serving. Every student is also required to take a fruit or vegetable with their lunch, no ifs, ands or buts about it.

While The Abbey Group has various guidelines it follows for food service clients, individual sites look to communicate with those eating the meals. “Just an open dialogue about food service,” said Wiese-Hansen.

She added that high school students aren’t always thrilled about the fruit and vegetable requirements but The Abbey Group does what it can to educate students and keep them happy.

For instance, The Abbey Group holds public meetings with students, parents and educators on school food and nutrition. Bombardier said she and her staff also interact with students on a daily basis, sometimes receiving suggestions.

“They start off with ‘Why can’t’ [we make one kind of meal],” said Bombardier, “and by the time we’re done, it’s something we’re looking into.” She added, “I just try to keep track of what they like and what they didn’t like and how we can fix things.”

Bombardier said that in general, she and others enjoy the community atmosphere in BFA’s cafeteria.

She added that once in awhile, the football team will come in to help with setting up the cafeteria for a last minute schedule change or late food order that comes near mealtime. “My big old football boys [make] sure the girls are OK,” Bombardier joked.

When students came pouring in as the lunch bell rang, BFA cafeteria monitor Ellen Gissel watched the door and chatted with students as they passed on their way to lunch.

The Abbey Group-run food service feeds 60 percent of the student body at BFA-St. Albans, a higher percentage than average for school hot lunch programs. “We try and draw attention to the lunch programs and promote them to students,” said Wiese-Hansen.

She added that The Abbey Group is also dedicated to feeding children who may not have adequate meals at home. In addition to its hot lunch programs, The Abbey Group runs breakfast, after-school snack and supper, summer meal and other special nutrition programs in schools meeting at-risk guidelines for students, all the while maintaining confidentiality for students receiving aid.

“We see kids before holidays filling up their backpacks if they can,” said Wiese-Hansen. “We want to feed and take care of children, [and] we have focused our charity efforts in that way.”

For instance, The Abbey Group allows students in the hot lunch program to eat unlimited amounts of fruit, vegetables, soup and salad. “They really can eat a lot of food,” said Harrison.

The food service group is also sensitive to accommodating special dietary needs through the school nurse as well. “We all work together as a team,” said Wiese-Hansen.

Being aware of and proactive towards community needs is a benefit of The Abbey Group’s small size, said vice president of operations Scott Choiniere.

“We’re all hands on,” he said in a phone interview this week. “We’re all in our schools everyday. We’re small enough that we can make [things] happen quickly.”

Choiniere graduated from BFA-St. Albans several months before The Abbey Group began its first year running the hot lunch service there. He started washing dishes for the Abbey Restaurant his freshman year of high school, and Choiniere said from that point and up to now, 29 years later, The Abbey Group has always done things the same way: as a team.

“Everybody from the bottom all the way to the top,” he said, “we’re like one team working together.”

“We’re always helping one another,” added Choiniere, to help the community.

“That’s our common goal,” he said. “Feeding the kids.”