Written by AbbeyGroup on April 28, 2014. Posted in Abbey in the News, Announcements, The Abbey Feeds 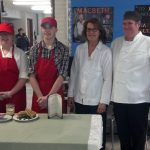 Recently, 3 teams from SAU 7 competed in a Teen Cook-Off challenge.  Initiated by the district wellness committee, and funded by a grant from Harvard Pilgrim Health Foundation, the event challenged the student teams to create a school lunch that could meet the new USDA nutritional regulations.  Each team was coached by staff from local restaurants, and advised by Steven Learned, the area Abbey Food Service Manager.  The event drew enough interest to require a preliminary cook-off at 2 of the schools, Pittsburg School and Colebrook Academy.  Those winners met the team from Stewartstown Community School on April 16th to decide which school would come out on top.  The winners not only get bragging rights, but also monogrammed chef jackets with the winning restaurant’s logo.  The judges for the final were Steven Learned, Nina Hansen, and Elaine Van Dyke.  Elaine worked for the New Hampshire DOE in Childhood Nutrition for many years, and now operates her own consulting firm.  The winner of the competition will be announced during a special presentation at the Tillotson Performing Arts Center in Colebrook on May 6th.