Written by AbbeyGroup on June 4, 2014. Posted in Abbey in the News, Announcements 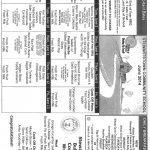 Colebrook, Stewartstown and Pittsburg recently participated in the first annual regional Teen Cook – Off. The student chef’s at each school took to the challenge of  working alongside several local restaurants and The Abbey Group,  in developing and producing new menu selections for the restaurants and school meal programs. The entire process consumed several months of planning and coordination. The two-part event started as a preliminary cook-off and the final cook-off was held on April 16.  The Abbey Group had a hand in several parts of the competition including coaching and judging.

The students were required to make recipes that met the new food nutrition requirements met by the USDA while staying within 850 calories for the entire meal.

This year’s winner was Stewartstown Elementary and as winners, their menu was featured as a special school lunch where parents and the greater community were encouraged to join.