Written by AbbeyGroup on August 31, 2015. Posted in Abbey in the News, Awareness, Dishing Up Local, Uncategorized 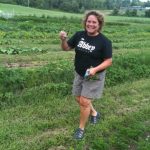 Abbey Group regional manager Maureen O’Neil (Greater Bennington, VT Area) was recently interviewed as a part of a news piece for the Brattleboro Reformer on the importance of school lunch. Read the whole article below:

A considerable portion of the “eat local” and farm-to-plate movements give emphasis to helping young people wean off burgers and fries and get hooked on fruits and greens. Most adults seem to agree planting the seeds of good nutrition in today’s students via creative meals will result in healthier grown-ups in the future. With a new school year beginning, experts shared tips on how to keep children healthy and happy during the hours in which parents aren’t present.

“I’m a parent of young kids. We try to have a variety of foods — fruits and vegetables. We try to have a balanced diet,” he said. “One way to do it is to get whole carrots and spend the time to cut up the sticks yourself. That is pretty effective in getting kids to eat (them).”

Berkfield also mentioned the classic “ants on a log,” which traditionally consists of raisins embedded into peanut butter that is spread on a celery stick. He said variations can substitute carrots or bananas for celery.

He said fruits are typically more popular than vegetables among children, but parents can entice even the pickiest of eaters by taking them apple-picking in one of Vermont’s beautiful orchards. He added this is usually pretty affordable and kids often enjoy slicing up and eating the apples afterward.

Peter Stanton, director of The Nutrition Center in Pittsfield, Mass., said youngsters need to be exposed to healthy foods early and often in order to acquire a taste for them. He said today’s society tells children to “eat your vegetables so you can have your dessert,” but parents should make fruits and veggies the most appealing part of a meal.

“You can’t just throw new vegetables into the lunchbox and expect them to get eaten,” he said. “I think the truth is that kids will find anything interesting if it’s introduced well. Vegetables just as a side to lasagna is not interesting.”

However, the focus on juvenile nutrition is often geared toward school food. Maureen O’Neil, the Southern Vermont food service director for the Southwestern Vermont Supervisory Union in Vermont’s Bennington County, is employed by The Abbey Group and said school nutrition programs are much improved from decades ago.

“The most nutritious and well-balanced lunches are school lunches,” she said. “And kids are more likely to eat nutritious foods in school if parents encourage them to do so.”

O’Neil said all SWVSU students eat for free, regardless of their household’s income status. She also mentioned the schools in her supervisory union also offer breakfasts for students. She added it is important to keep portion sizes under control and there is a direct correlation between proper nutrition and academic performance.

“One of the things Food Connects is focused on is improving the lunches in the schools in the area. The meals that many students qualify for are free lunches, and we’re working hard with administration, with local farmers and with teachers and parents to improve the quality of those meals,” he said. “At (Brattleboro Union High School), only 75 percent of students who can get a free lunch actually do, and I think there a variety of reasons.”

He said there is a great deal of paperwork and red tape to go through to get free lunch and some families simply don’t know they qualify. Others, he said, are afraid to get free lunch because of the stigma attached.

The Nutrition Center has produced “Food Adventures Cookbook: A Guide for Young Chefs.” This recipe was taken from the book