Written by Cassandra Fraser on February 3, 2022. Posted in Chef's Corner, Inside The Abbey Group, Newsletter Features, The Abbey Feeds 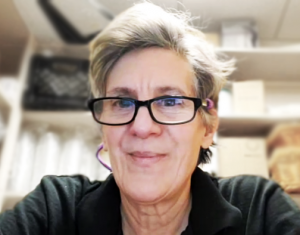 Our Director of Marketing, Cassie Fraser, recently sat down virtually to interview our talented Northfield Middle & High School chef, Sarah Bishop. Read on to get to know her!

Cassie: To get us started, what is your favorite dish to cook or bake?

Sarah: Having a favorite food is like picking a favorite child and it also depends on the day of the week, it changes on a daily basis, I think. One thing that I really like doing recently is smoking stuff. I bought a smoker during COVID and I do a lot of smoked pork, turkey, salmon. Haven’t had a chance to use it recently but that’s something I really enjoy doing and creating new stuff with rubs.

C: What is your least favorite food?

S: My mother made us try everything, literally everything. Just try it, you don’t have to like it but just try it. And the one thing I just would not try was cow’s tongue. Basically, I proved that I was not capable of eating it because I just about threw up on the dining room table. This was when I was about five.

C: I feel like that’s fair, and even the fact that you tried it as a five-year-old is impressive in my book.

S: She made the mistake of showing it to me before she cooked it and it was this giant cow’s tongue. And I am like I am not gonna eat that. No, not gonna happen. That was the only thing that I really, really did not like.

C: Is there something else you thought wanted to do other than being a chef?

S: Yea, I think the one class that I did incredibly well at in high school was anthropology. I was not a good school student, but I was fascinated by people. I like watching people and how they interact, and why do they do the things they do. It’s a fascinating thing that I would love to delve deeper into at some point. That’s probably what I would have excelled at had I gone to college.

C: So what was it that made you realize you were passionate about cooking?

S: Well having started at a really young age, I think it was something that as a job in high school and shortly after high school is getting a job in a kitchen and realizing that I am really good at this and I had a lot of background. My mother worked for Julia Child and she was teaching me how to do soups and stocks, and showing me techniques that I took for granted because I thought “Oh, every kid must know how to do this.”

S: Right, right. But it’s an artform, it’s something where you can be super creative. It’s grueling and I love a challenge.

C: And now what led you to your job at Northfield?

S: So originally [Executive Food Service Director] Bob Hildebrand hired me to be the chef at the [Vermont] state house in the cafeteria at the Capitol. Of course, that closed shortly after for COVID. I was there less than a year before COVID hit and did not reopen until recently. So last April Bob called me up and says “Well, how about Northfield – a school job?” And I was like, “You know what, I could dig that!” I know when my vacations are, which is something unusual in the food business. It’s a great schedule, and I was like “Yea, I’ll do it!” At my age, I have less than 10 years to go until I can retire so this is kind of the speed I want to drive right now.

C: Alright so what is the thing you love best about being a school chef?

S: At this particular school, it’s the people. There is a really great core group of people starting with the principal, Lee Ann [Monroe], who is so super cool and fun. She just brings a ray of sunshine every day when she comes in the kitchen. And that’s contagious. The kids are better behaved, I think, and they’re making school fun instead of this nerve-wracking challenge. It makes for a way better atmosphere.

C: And now what is your favorite thing to do when you’re not cooking?

C: So, what is the best advice you have ever received?

S: I think my dad, who knew me I think better than anybody, was always telling me not to hold things in. Don’t be afraid to ask for help or anything. Say what’s on your mind and just communicate well with everybody. But I think not being afraid to ask for help is some of the best advice I’ve ever gotten. You know I used to try to do everything myself, I don’t need any help, I’m a strong, independent woman, which is of course a bunch of nonsense.

C: That is absolutely something we should all be better at!

S: Being strong and independent is awesome, but knowing your limits is also pretty important.

C: That’s also a good little nugget. So now do you think being a chef is a natural talent or is it something that anyone learn?

C: I love that! That’s such a good perspective. Alright and my last question. What do you wish more people knew about your position?

S: I think in the schools, this is my first job in the public school system, or any school system, is that number one the schedule is fantastic. And for people, especially people my age, I think if you’re in a restaurant, you hit burnout. It’s stressful, it’s hard. And I think if more people understood that [being a school chef] is a great way to be creative, be a good chef, have a great schedule, and it’s super rewarding. This is a great position. Especially for parents, it’s such a great opportunity to go to work exactly when your kids [go to school]. But also in the food industry, it’s nights, weekends, it’s horrible schedules with people constantly calling out sick. There’s a dark underbelly to the restaurant business. And this is the polar opposite. It’s very positive, it’s a good, healthy environment.

Thank you, Sarah, for your delicious contributions to The Abbey Group!