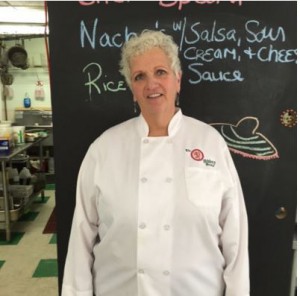 Q: How long have you been working in school kitchens?
A:  I have been cooking for students for 8 1/2 years

Q: What is your favorite kitchen gadget for processing local food?
A:  A zester!

Q: What is your favorite vegetable?
A: It’s hard to narrow down so I have to go with Spinach, garlic and onions.

Q: On average how many meals do you produce per day?
A: We serve about 360 a day.

Q: What is your favorite part of your job?
A: My favorite part of my job has to be the appreciation I get from the students and staff at Leland and Gray and the support The Abbey Group has given me to put out creative, healthy food!

Q: Anything else you’d like us to know about your program?
A: I love working for The Abbey Group, they are so passionate about quality and purchasing local. Also I am excited to start using the produce coming from the Leland and Gray Garden!

Written by AbbeyGroup on September 30, 2015. Posted in Abbey in the News, Dishing Up Local, Inside The Abbey Group

The Abbey Group’s Chef Steve Learned was recently quoted in an article about Vermont Jr. Iron Chef! The Abbey Group is involved in many teams around the state which compete in the Annual competition. Check out the article below  for more information about this great event!

Written by AbbeyGroup on September 20, 2015. Posted in Abbey in the News, Announcements, Dishing Up Local, Education, Events

Make sure to visit the Milton Independent online or read below to check out an article about our new chef at Georgia School! We are so excited to welcome Peter Siegfried to our Abbey family.

Georgia students can expect more variety for lunch when they return to school next week.

In preparation for hordes of hungry kids filing into the GEMS cafeteria, workers are installing new refrigerated display cases and a panini grill to expand lunch offerings.

The upgrades are funded by $40,000 of the 2015 surplus, one of the school board’s attempts to spend down the money before the end of the fiscal year.

The board received a wish list of sorts for cafeteria equipment needs from Scott Choiniere, Abbey Group vice president of operations and GEMS food service representative, and new chef Peter Siegfried in the spring.

The board also OK’d the purchase of two new milk coolers, a convection oven, an ice cuber, plus two cash register stations and $3,000 of small wares. Only a request for more walk-in cooler storage was tabled due to lack of space, Choiniere said.

“The school board is invested in the program,” he said. “There’s definitely going to be a lot more variety [for students].”

This year, for $2.25, students can now choose from made-to-order sandwiches, panini specials, express items like chicken or pulled pork sandwiches, a chef’s special and fresh grab- and-go items like cheese, fruit, hummus, chips and salsa and three varieties of pizza cooked on the new conveyor.

“The freshness of it is going to help,” Choiniere said. “We’re going to do cooking in front of the kids, so you’re going to have that smell in the room, too.”

Pizzas were previously cooked in the kitchen, connected to the cafeteria by a corridor. As a result, in recent years, the school fielded complaints about food quality, temperature and freshness.

The board attempted to address this with a $3 million bond for a cafeteria expansion and redesign. Plans proposed abutting the kitchen and cafeteria and growing the 2,651 square foot space that officials say is incredibly cramped come lunchtime.

Board member Ben Chiappinelli has indicated the cafeteria project will return, but for now, the small-scale improvements will help, Choiniere said, despite having no extra space.

Choiniere estimated about 100 students come through the lunchroom each shift: “We’re doing the best that we can do with what we have,” he said.

Chef Siegfried came to Georgia at the tail end of the last school year after running kitchens at IBM and the University of Vermont, and Choiniere is especially excited about what the New England Culinary Institute-educated chef can bring to the table.

Siegfried and Choiniere are both dedicated to starting a farm-to-school program at GEMS, provided they drum up enough volunteer support. Choiniere envisions a vegetable garden, fruit trees or even a greenhouse for growing a hyperlocal lunch or for an outdoor classroom.

“The sky’s the limit,” he said, citing other school Abbey programs that make maple syrup or even raise livestock. “It’s still in the planning stages … we need to get some people with a passion for it to help us.”

Teachers are showing interest, and the school board is in favor, but funding is still a question. One Maine school leveraged a parent’s skills as a landscape architect; its walking paths, school garden and orchard were all designed for free, Choiniere noted.

The Abbey Group locally sources as much of its food as possible, but you can’t get much closer than your own backyard. Choiniere envisions school-wide planting days and outdoor math and science lessons someday.

He’s well aware of neighboring Milton Town School District’s success with its own program, nationally recognized for its excellence in 2013 when First Lady Michelle Obama invited fifth-graders to plant and harvest vegetables in the White House garden.

“We want to go to the White House; we want to be in the magazines,” Choiniere said. “Everybody’s got to get together … it can go a lot of places.”

Written by AbbeyGroup on September 9, 2015. Posted in Abbey in the News, Announcements, Dishing Up Local, Education, USDA

Abbey Group regional manager Maureen O’Neil (Greater Bennington, VT Area) was recently interviewed as a part of a news piece for the Brattleboro Reformer on the importance of school lunch. Read the whole article below:

A considerable portion of the “eat local” and farm-to-plate movements give emphasis to helping young people wean off burgers and fries and get hooked on fruits and greens. Most adults seem to agree planting the seeds of good nutrition in today’s students via creative meals will result in healthier grown-ups in the future. With a new school year beginning, experts shared tips on how to keep children healthy and happy during the hours in which parents aren’t present.

“I’m a parent of young kids. We try to have a variety of foods — fruits and vegetables. We try to have a balanced diet,” he said. “One way to do it is to get whole carrots and spend the time to cut up the sticks yourself. That is pretty effective in getting kids to eat (them).”

Berkfield also mentioned the classic “ants on a log,” which traditionally consists of raisins embedded into peanut butter that is spread on a celery stick. He said variations can substitute carrots or bananas for celery.

He said fruits are typically more popular than vegetables among children, but parents can entice even the pickiest of eaters by taking them apple-picking in one of Vermont’s beautiful orchards. He added this is usually pretty affordable and kids often enjoy slicing up and eating the apples afterward.

Peter Stanton, director of The Nutrition Center in Pittsfield, Mass., said youngsters need to be exposed to healthy foods early and often in order to acquire a taste for them. He said today’s society tells children to “eat your vegetables so you can have your dessert,” but parents should make fruits and veggies the most appealing part of a meal.

“You can’t just throw new vegetables into the lunchbox and expect them to get eaten,” he said. “I think the truth is that kids will find anything interesting if it’s introduced well. Vegetables just as a side to lasagna is not interesting.”

However, the focus on juvenile nutrition is often geared toward school food. Maureen O’Neil, the Southern Vermont food service director for the Southwestern Vermont Supervisory Union in Vermont’s Bennington County, is employed by The Abbey Group and said school nutrition programs are much improved from decades ago.

“The most nutritious and well-balanced lunches are school lunches,” she said. “And kids are more likely to eat nutritious foods in school if parents encourage them to do so.”

O’Neil said all SWVSU students eat for free, regardless of their household’s income status. She also mentioned the schools in her supervisory union also offer breakfasts for students. She added it is important to keep portion sizes under control and there is a direct correlation between proper nutrition and academic performance.

“One of the things Food Connects is focused on is improving the lunches in the schools in the area. The meals that many students qualify for are free lunches, and we’re working hard with administration, with local farmers and with teachers and parents to improve the quality of those meals,” he said. “At (Brattleboro Union High School), only 75 percent of students who can get a free lunch actually do, and I think there a variety of reasons.”

He said there is a great deal of paperwork and red tape to go through to get free lunch and some families simply don’t know they qualify. Others, he said, are afraid to get free lunch because of the stigma attached.

The Nutrition Center has produced “Food Adventures Cookbook: A Guide for Young Chefs.” This recipe was taken from the book

Written by AbbeyGroup on August 31, 2015. Posted in Abbey in the News, Awareness, Dishing Up Local, Uncategorized