Written by AbbeyGroup on February 3, 2017. Posted in Dishing Up Local, Events 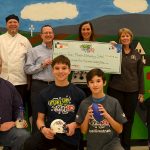 BARRE TOWN, Vt. — The New England Dairy and Food Council, in conjunction with the National Football League, presented Barre Town School with a check for $3,473 as part of the Fuel Up to Play 60 program.

Jill Hussels — a nutrition specialist with the council — and Bonnie Hall — representing Fairmont Farm in East Montpelier, Vermont. — were at the school Jan. 27 to hand over the check.

Fuel Up to Play 60 promotes in-school nutrition and physical activity at schools across the country by encouraging students to eat nutrient-rich food and exercise at least 60 minutes per day.

Much of the money will be used to replace Barre Town’s commercial blender, which is used to make healthy yogurt smoothies for the students; to buy a new orange slicer; and to host a smoothie taste test and competition, which has yet to be scheduled.

The current blender, which was also bought with Fuel Up to Play money, has been popular with the students, said Bob Hildebrand — the Abbey Group’s Central Vermont food service director. In the three years the school has had it, the blender has had a lot of use and needs to be replaced.