Written by AbbeyGroup on October 18, 2012. Posted in Abbey in the News, Inside The Abbey Group, Uncategorized 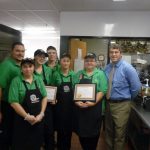 Congratulations to Lori Robinson and Adele Blaisdell, two Abbey Group employees at the Barre Town School, for saving a 5th graders life.  Because of their quick actions on September 11th, 2012 a little girl’s life was spared.

The young girl is highly allergic to turkey and she had put some on her tray by accident.  The ladies noticed what she had done and quickly told her she needed a new tray.  The young girl said she already had eaten some of the turkey.  The rushed the girl down to the nurse’s office where an EPI pen was administered and 911 was called.  At that time the young girl was already starting to have seizures. Without their heroic efforts this young girl would not be with us today.

Two days ago they were presented with Good Samaritan awards from all of us at The Abbey for their extraordinary efforts.

Thank you Adele and Lori from all of us at the Abbey Group.  You make us very proud!